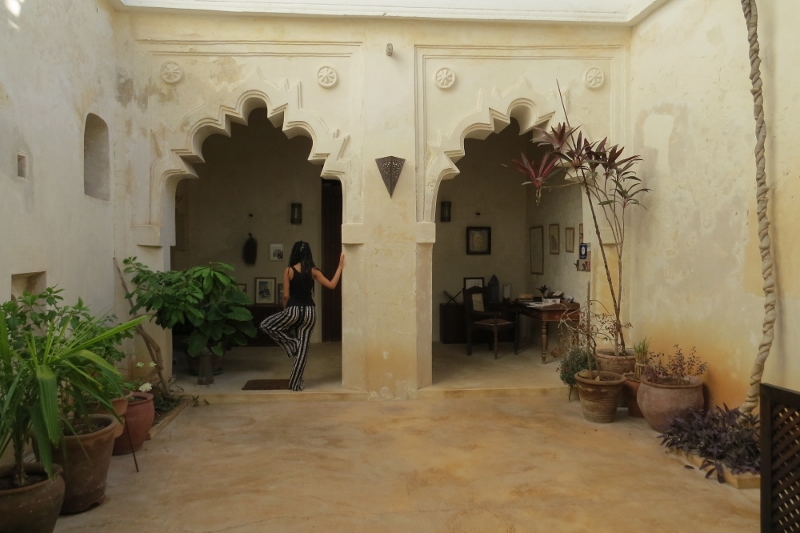 In the historical Lamu Stone Town that is listed as a UNESCO World Heritage Site, stunning Swahili houses line the narrow lanes where only two people can walk astride with the donkey – and now with changing times, the motor-bike – having the right of way. Famed for their limestone architecture and wooden carved doors, many have a story to tell.

Hopping off the boat at the pier, a short walk to the 18th century Subira House that once belonged to the liwali or governor of Lamu behind the Lamu Fort, opens its doors for us and we’re in its courtyard.

Lamu Town on the island of Lamu in the Lamu archipelago boasts of being the oldest Swahili town that has been continuously lived in since the 13th century. Its history is rich and colourful as a super-rich trading island, a powerful sultanate and an important port, frequented by merchants from the distant lands of the Far East and Arabia and much later the Europeans.

Many a sea-sailing merchant set up home on the islands of the archipelago giving rise to the Swahili culture. The stone houses reflected the grandeur of their wealth until the end of the Sultanate and the beginning of European rule in the 19th century.

With the golden days of the sultanate over, the grand homes lost their lustre until the arrival of European visitors from the 1970s onwards who bought many a crumbling house to turn into exquisite homes.

Subira House listed as Grade 1 because of the careful restoration of the historical Swahili house has been a labour of love for Christina and Paul Aarts – she Swedish and him Dutch – who met on the isle in 1975 and returned 15 years later to make it their home.

In 1990 –after ten years of buying and rebuilding a run-down building in a small village in Sweden and transforming it into a hugely successful hotel, the Aarts decided on a long break. When they asked their two young sons where they would like to go, they replied ‘Lamu, where you met’.

“So we returned and rented a house,” recalls Kiki – as Christina is popularly called in Lamu.

A visit to the Swahili House museum turned all their plans around. “We had planned after building our hotel that we would never get involved with anything like this again but the guide at the museum said we would really like a house he wanted to show us.”

The house had been one of the most lavish homes until colonial rule set in and slavery abolished. With no ‘free’ labour to work on the farms, the owner went into debt and began selling his homes that lined the street.

“When we saw the house, it was subdivided into three flats and was horrible.”

But what caught Kiki’s interest was that it was like the house of Lamu’s most famous poetess of the 19th century, Mwana Kupona whose poem Utendi wa Mwana Kupona (The Book of Mwana Kupona), is one of the most well-known works of early Swahili literature.

In 1975, when Kiki spent months in Lamu she became enchanted with Swahili poetry, having had recently graduated in linguistics.

“Lamu is the cradle of Swahili poetry,” states Kiki. “I ended up staying for a few months in Lamu in 1975 because my friends wanted somebody to look after their house

“I discovered ‘street poetry’, in everyday language, like a woman receiving a message from her husband on a fishing trip or women chatting. I recorded versus and versus, and spent a week on Pate island. At the time it was all oral poetry passed from generation to generation.”

The then curator of Lamu museum, Tim Allen encouraged her passion and she sought a scholarship to study Swahili poetry but was turned down. Today, four decades later, in her private collection she has a collection of more than 50 poems from that time which have never been publicly heard.

The Story of Subira

Subira – named after the daughter born in 1975 of friends in Siyu on Pate Island – is the only house in Lamu with a dome at the entrance reflecting Omani architecture. It boasted 12 of the finest wooden carved doors, some by Mohamed Abubaker Kijumwa, who is hailed as the Socrates of Lamu. Born in Lamu in 1855, he was a self-taught man of exceptional talent — a philosopher, historian, artist, woodcarver, calligrapher and scholar besides other titles. One of his lasting contributions to Lamu was the setting up of the wood carving industry. Prior to that, doors were shipped in from Zanzibar or India, and Lamu developed its unique style of door carving in the late 1800s. Kijumwa’s wooden carved door also features on the German Post Office in Lamu.

Before the Aarts bought the house, the doors had been sold for a paltry sum to an European and replaced with much smaller doors. Today, the wooden doors – of which an estimated 200 remain in Lamu – made before 1946 are protected objects and as national monuments, the law is tough on how owners dispose of these coveted antiquities.

When the Aarts began knocking down the badly constructed ‘new’ walls to subdivide the house, did the original architecture reveal itself – beautiful arched doorways and the customary ‘baraza’ by the doorway, the notches in the walls, exquisite carved walls and courtyards that are now filled with tropical gardens.

Soon after the house was redone, the Aarts had an unusual visitor – an old woman in her 90s who had worked as a slave in the house. “She walked excitedly around the house, touching the walls, and talking. She remembered her master as a kind man.”

“It’s an on-going labour of love and l love every corner of this house,” states Kiki. “The mangrove beams have to be replaced every twenty years because they begin to rot and the walls are re-plastered with the traditional lime mix every few years.

“It’s all done by hand which makes it slow work.”

“Lamu has become the centre of our world. We love the people, the pace and the history. But after 27 years we are thinking of selling Subira because the structure of Lamu is going to change with the port – and other proposed developments like the coal plant and the resort city that will be another Dubai.

“It’s not the place we need for our piece of mind.”

Elephants on the Runway

Why African Fish Eagle is under threat of extinction

On the Isles of Lamu