He couldn’t have chosen a better spot to build his castle.

In the first light of the day the 360-degree panorama from Grogan’s Castle is dramatic – with the two ice-clad peaks – Mawenzi and Kibo – of Kilimanjaro from the veranda of the legendary maverick – Grogan himself.

In my mind’s eye l can see him hoping off his eccentric bed – a flat metal sheet bolted against the wall and encased in a wire cage – nothing frivolous about it – and taking in the grandeur of it all – the Pare mountains in Tanzania that are part of the Eastern Arc Mountains stretching from Kenya’s Taita Hill to Tanzania’s legendary Usambara’s and more. Circling around, his eye would have taken in the shimmer of Jipe, the lake on the foothills of the Pare and shared between Kenya and Tanzania and then the wilderness of Tsavo.

If his ghost was to appear l would walk with him through the grand castle he built in the 1930s – with its thick walls, high ceilings, many windows and arches, spacious rooms where he would tell of his exploits – the most famous being the Cape to Cairo walk in 1898 to win the hand of the woman he had fallen in love with – Gertrude. At the start of 1900 and only 26, he had crossed the entire continent and earned his place in history as being the first – l guess human being – to do so.

The fact is that Cecil Rhodes –the British businessman who with his British South Africa Company founded Rhodesia (which the company named after him in 1895) – now Zambia and Zimbabwe had a plan. It was to build the Cape to Cairo railway and telegraphic line to span the continent. He hired Grogan to check out a possible route.

So Grogan walked (but not in one attempt – during his time in the military he had marched from South Africa to Mozambique. So he took off from where he left to make the epic 8,000 kilometres south to north).

But Rhodes died aged only 48 in 1902 from ill-health –and the dream died with him. 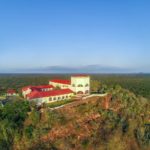 Back to Grogan. Born on 12 December 1874 – exactly 89 years before Kenya achieved her independence from British rule that Grogan was a stalwart of, he was also nicknamed the Churchill of Africa, Bwana Chui and Hemingway.

Literature depicts him as amazing, eccentric, cruel, compassionate, racist, visionary, entrepreneur, and so more. Walking through the castle, we may have sat in the enormous dining room with an equally enormous dining table and he might have told about the work going on below on the plains.

At that point, he was busy having water canals dug from the Njoro Kuba springs in Taveta fed by the waters of Kilimanjaro to irrigate his vast estate spread around the hill that was tilled for sisal, cotton, coconut, maize and more. For the next twenty years, he lived on the hill.

Driving down to spend a day at Lake Jipe in Tsavo West, we pass few sisal fields that have all but vanished and replaced by the horrendous invasive mathenge or Prosopis juliflora. Grogan during his time had set up a 45-acre fish farm to breed tilapia near Lake Jipe which boasts an endemic species of tilapia – Oreochromis jipe that’s now listed Critically Endangered. Fishermen at their homestead by the lake repair their fish nets getting ready to sail the lake in the evening.

Then we’re at Lake Jipe where a family of three red elephants leisurely munch on the grass making their way to the lake as we drive further to explore a part of the park little visited.

From Voi it’s 100 km to the castle in Taveta by the Tanzanian border. It’s an exciting road full of WW1 relics – read the antiques in Guerrillas of Tsavo www.guerrillasoftsavo.com

You need a four-wheel drive.

What else did Grogan do?

On the Isles of Lamu

In the Valley of the Samburu