Leisurely Lunch at Malindi Sea Fishing Club: One of the oldest in the country with an exciting deco of the great fish in the ocean

Above: The Blue marlin, the ‘Grander’ and a shark at Malindi Sea Fishling Club. Copyright Rupi Mangat

It’s the middle of the day and l’m exhausted from playing tour guide to a friend, showing her places of interest in a town steeped in history from the time of Zheng He, the Chinese explorer who stopped in Malindi in the 15th century, decades before the more famous Vasco da Gama did. Zheng He was presented with a giraffe by the Sultan of Malindi to gift to the Chinese emperor. The Chinese had never seen such an animal and it caused a stir on the streets as it was paraded down.

By lunch, l’m in want of food and a cold drink and we’re close to Malindi Sea Fishing Club which is open to all at a daily membership. It’s the ideal place to lunch in town on a hot, airless day.

It’s a quaint old club set in a pretty garden shaded by tall trees by the beach. Hoping off the tuk tuk, it’s a grand entry into the sea fishing club with a Great white shark barring its jaws at the entrance.  Inside, it’s a simple old-fashioned club from the fifties with nothing ostentatious to it. Its white washed walls – or rather columns –are open without glass windows and the low walls between the columns double as benches. The long bar features cold beers and spirits. I’ve found my place at the bar. A cold G&T for me please.

Eddie Aniere steps out of his simple little kitchen to show the menu. Aniere is the chef par excellence and owner of Barefoot Beach Camp with a kitchen at the sailing club.

The menu has the run of the gamut…soups and toasted sandwiches. It’s too hot for that. Salads from mixed to Mediterranean – too light; chicken with chips and salad not for me at the coast; steak and pastas with a choice of Bolognese, carbonara or pomodoro – too mundane.

Aaha…finally the menu is getting to my taste …seafood.

I’m not a fan of deep fried foods even if it’s calamari or spicy prawns. But l’m craving sea food.

“Don’t you have anything else on the seafood side?” I ask the tall chef.

“I have the daily special,” tells our man with a twinkle in his eye.

“A sushi and sashimi platter,” he replies.

I’m over the moon.

The G&T is done with as the platters appear in less than ten minutes.

They look like beautiful art pieces except that the canvas is a white porcelain plate set with fresh tidings from the sea.

The first bite of the thinly sliced kingfish dipped in ginger sauce with a touch of wasabi is tantalizing to the taste buds. It’s raw, it’s fresh. The taste is pure.

“The daily special changes every day,” tells the chef.

And that depends on the freshest fish the chef gets every day which means he just has to wade into the fish market a few minutes away every day.

Every morsel of my sashimi is heaven…the fresh prawns, smoked fish, octopus dipped in the soy sauce with a hint of fresh lime. On a hot afternoon it’s the perfect meal but also an acquired taste for raw fish isn’t for everyone.

Meanwhile, Aniere’s mother-in-law is ravishing her curry prawns with rice. Sashimi is not her choice of food.

“We serve everything here from breakfast to dinner,” tells Aniere, pleased that his sashimi platters have been eaten to the last morsel.

I’m also impressed with the prices on the menu. Every single dish is less than a thousand shillings (Kenyan) in a beautiful setting that is exciting to learn about. It’s also kid-friendly during the day and if you want to impress them with real models of sharks and sailfishes out of this sea, it’s the place to bring them too. Besides, there’s plenty of garden for them to run around safely.

“Serving seafood is my favourite,” continues Aniere. “There is so much you can do with it.” 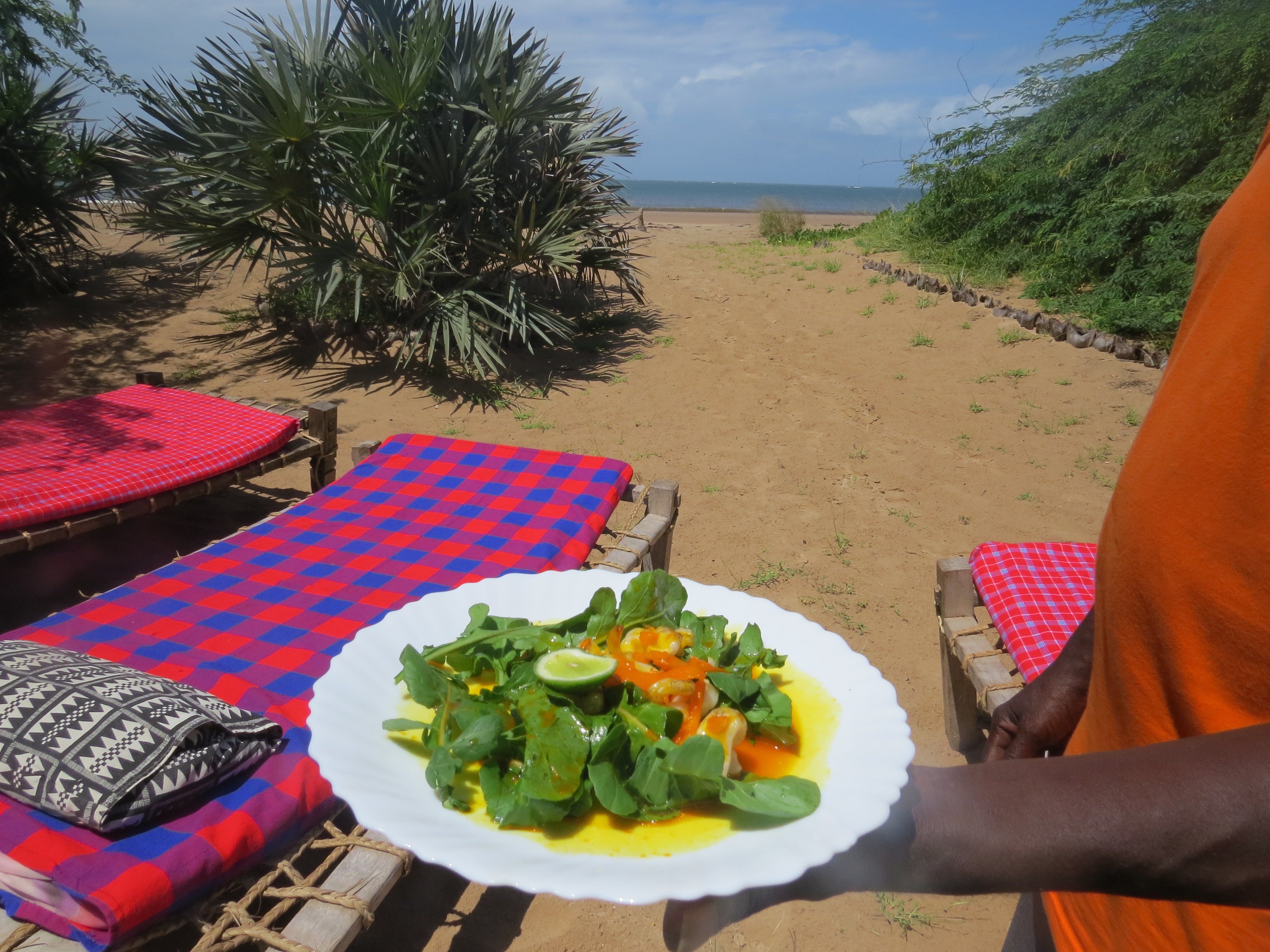 I’m thinking of the calamari in orange sauce with a tinge of saffron for colour, another of Aniere’s specials l’ve had.

Ugali is a bit heavy over lunch but that’s his other ‘new’ creation. You had olive oil and salt to the ugali mix which makes it silky soft. Break it into bite-size pates topped with mozzarella cheese…who would think of ugali with cheese?

Dine at Malindi Sea Fishing Club https://www.malindiseafishingclub.com/ – the bar is a very social place to stop by for an evening drink and catch up with the anglers’ stories and upcoming competitions.

Pay the daily membership of Ksh 100 if you are not a member.

Kenya’s first ‘grander ‘is a blue marlin weighing 567 kilogrammes caught on 18th March 1995 after a gruelling six and a half hours. In fishing terms, a ‘grander’ is a fish weighing 450 kilogrammes and coveted by anglers.

“We used to tag and release the billfish,” tells Rick Bate. Billfish are predatory fish which have prominent bills, and are large like the sailfish, swordfish and marlin.

During this time, the migration route of these billfish was recorded. “They move fast and long distances and we were able to map their migratory route that was between Yemen, Mozambique, Kenya, Somali and back to Yemen.”

The tag and release programme run by The Billfish Foundation based in the US, gathers data from anglers around the globe. It provides valuable data for billfish conservation like understanding migratory routes, growth rates, survival rates and mortality rates.

“Unfortunately it got too expensive to buy the tags and with that the magazine that the club published, Rainbow Runner stopped. That was in 2015 and since then we have no records of their movements.”

He is concerned. Reading though the club’s literature, its fame and success was grounded on the richness of the billfish in abundance. “On a good day, anglers caught 10 to 20 sailfish.

A lot has to do with the uncontrolled fishing off the Malindi shores by huge trawlers fitted with gigantic nets swooping out everything from the sea indiscriminately. These include turtles, dolphins, sharks and even whales as by-catch.

Take the historical route with the quaint Portuguese chapel built by Vasco da Gama in 1498, the famous explorer who charted the first sea-route from Europe to India, hiring an Indian sailor in Malindi. The feisty sailor also had the Vasco da Gama pillar built – as he did at the points he anchored on his epic sail east.

A few metres past the pier and we’re at the museum with the mast to honour Bartholomew Diaz, the Portuguese nobleman who was the first European to sail around the southernmost tip of Africa in 1488 that so inspired Vasco da Gama.

In the square by the mast stop at Mekatilili wa Menza’s statue. The Giriama woman dared the men to fight against colonial rule in 1913. She was caught and exiled to western Kenya, escaped and walked 1000 kilometres back to Dakatcha woodlands near Malindi where she is buried. 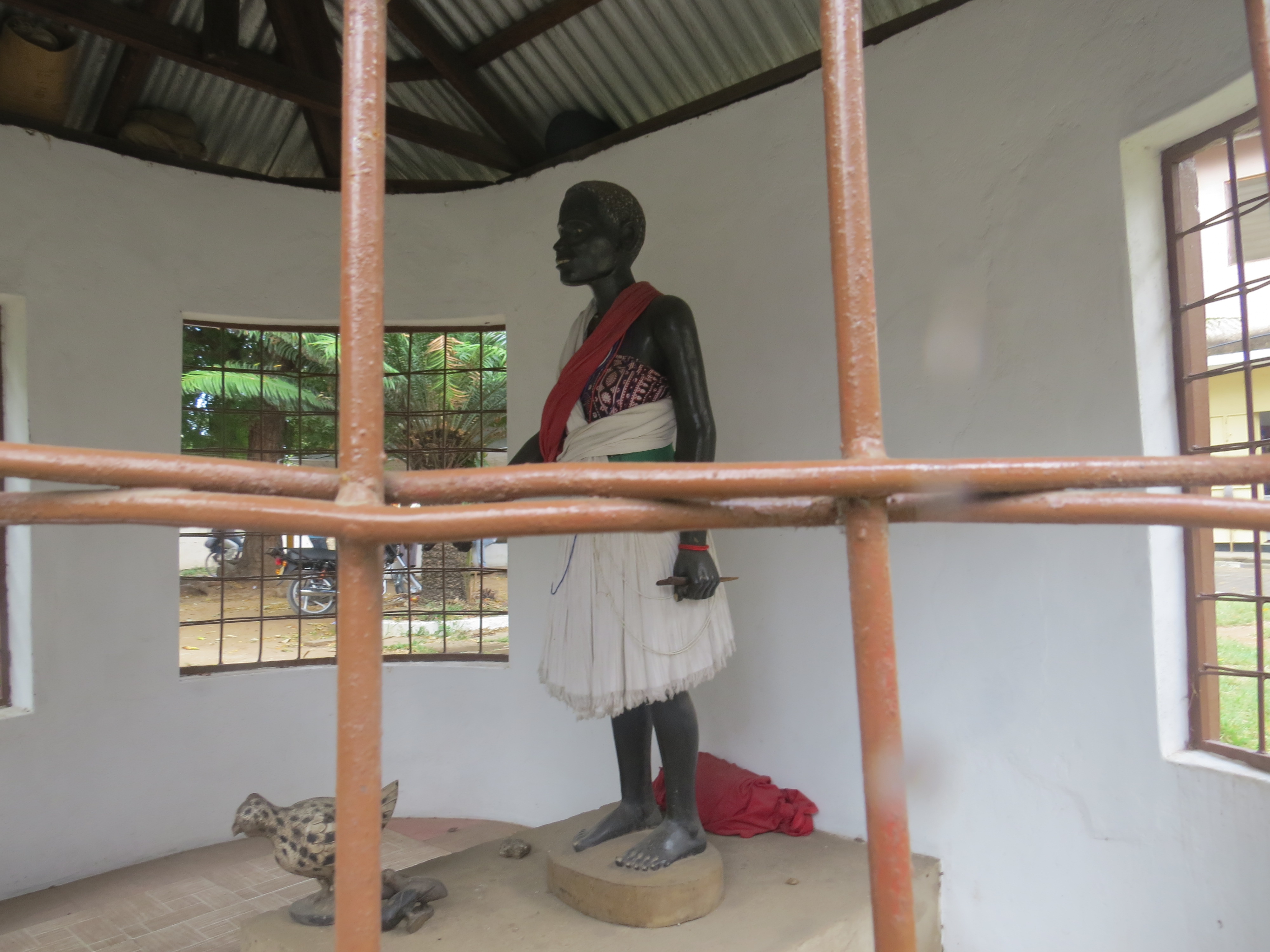 Dakatcha is famous for the amazing sand-city Marafa and the endemic Clarke’s weaver whose nesting site was only discovered in April 2013 in its wetlands. This time, our heroine has shed her buibui and is in her traditional Giriama straw skirt.

Lukenya’s Panorama of a 360 world

Twixt the Lakes of Natron and Magadi

2012...a hard of elephants browsing around a thorn