It’s busy, busy, busy with 500 Grey Crowned Cranes in front of us pecking for grains on the recently harvested wheat field by the shores of Lake Ol Bolossat stretched in the shadows of the Aberdares.

“The Grey Crowned cranes are here all the time,” tells George Ndung’u, founder of the Nyahururu Bird Club, Olbolossat Biodiversity Conservation Group and of recent, the Crane Conservation Volunteers. 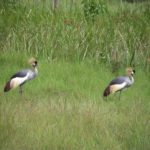 “It is the largest flock we have,” states Ndung’u who has been monitoring the bird for almost twenty years.

I can hear Kerryn Morrison from South Africa gasp. She is the partnership manager in Africa for the International Crane Foundation and Endangered Wildlife Trust. It’s the largest flock she has seen in her two decades of research work on the crane. It goes to say something about the site.

It’s a medley of colours watching the birds feeding and bursting into a jig every so often with the unmistakable reverberating call that at one time was heard all over the continent.

The Grey Crowned Crane is now listed endangered by the International Union for the Conservation of Nature (IUCN) yet it features prominently on the crest of Nairobi county council and the emblem of Uganda.

A bird of the wetlands, Morrison reveals that the Grey Crowned crane population has crashed by 80 per cent in the last two decades as wetlands are drained to pave way for buildings, farms and roads – yet our very existence depends on wetlands functioning as sponges to soak in the rain and release it gradually into the rivers and lakes.

“The cranes are now raising their young – from January to June,” Ndung’u volunteers more information. “From July to December they are breeding, laying their nests deep in the swamps.”

A beautiful greyish bird with dark black tips on the wing flies close to the ground. It is a Pallid harrier – a bird of the open plains and marshes. Flying low it surprises its prey – things like lizards, mice and even small birds.

Our next spot is further down the main road to the southern side of the lake. With no rain it is shallow and shrunk in size and no fishermen around. Ndung’u points to the wetlands along the shore where the cranes nest.

In 2008, the lake was listed as the 61st Important Bird Area in Kenya giving it a global status as a habitat for birds of global conservation concern such as the Grey Crowned Crane. The other IBAs in central Kenya are the Aberdare Mountains, Kianyaga Valleys, Kikuyu Escarpment Forest, Kinangop Grasslands, Mt Kenya and the Mukurweini Valleys.

Ol Bolossat is an amazing lake with a yo-yo act – drying up at times to the extent that everyone gets concerned that it may not surface as it happened almost a decade ago.

The honk of a hippo tells us that the river horse is about to emerge from the lake for its night of feeding on the grasses around the lake.

By the time we’re back in Nyahururu the streetlights are on and traffic. When Joseph Thomson walked this way in 1883 on his epic journey inland that no white person had ventured, he met two warring Maasai clans. When he asked what the place was called – they replied ‘naiurru-ur’ – for waterfalls. Thomson heard it as ‘ururu’ from which Nyahururu gets its name and he was so taken by the beauty of the falls that he named them Thomson’s Falls – after himself.

More than a century later, Panari Resort Nyahururu by the gorge where the Ewaso Nyiro flows celebrates its first anniversary surrounded by the grandeur of Nyahururu – the lake, the hippo pools, the Aberdares, the forests with the elephants  and of course, the falls.

There are many circuits to travel from Nyahururu – Laikipia and the conservancies; Nakuru passing Bahati forest and Lake Solai; Lake Baringo. Or go east through the Aberdares and onto Mount Kenya. You’re in the middle of Kenya – any direction will lead you somewhere.

There are many affordable two-star hotels in Nyaharuru. For luxury go to Panari Resort Nyahururu http://panarihotels.com by Thomson’s Falls.

Nyahururu is 200 kms from Nairobi via Njabini – stop at Njabini Spinners for hand-spun rugs and the story of the endemic bird of Nyandarua – the Sharpe’s longclaw.